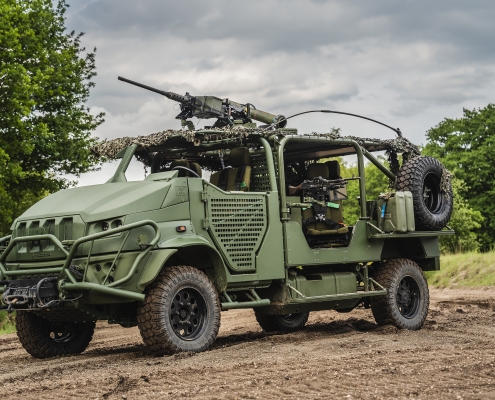 To broaden the range of the MUV family and building on the successful AnacondA series of Dutch Military Vehicle, which is currently in operation with a NATO country, IDV and DMV partnered up to develop a highly specialized vehicle variant on the MUV platform, suitable for Special Operations Forces and adaptable to the needs of various other branches within military forces such us fire-support solutions, fast attack vehicle, cargo- or personnel carrier, ambulance etc.

Displayed at Eurosatory 2022 in a fully open version, but also available in a partial as well as a completely closed version, the AnacondA SOF can meet the requirements of the most demanding customers. 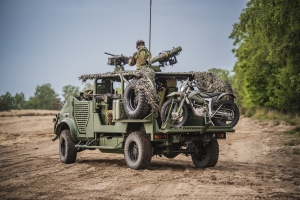 The MUV vehicular platform can be equipped with a choice of FPT Industrial engines, featuring leading EURO VI technology and developing 180 hp or EURO III technology generating either 146 hp and 180 hp. The engines are specifically designed to operate in demanding environments, including extreme temperatures ranging  from -32°C to +49°C, and to operate with low-quality fuels. They can be coupled with either an FPT Industrial six-speed manual gearbox or an eight-speed automatic with torque converter. Mobility is further enhanced by a permanent 4×4 drive with central/front/rear lockable differential and a PTO equipped transfer case as well as by the independent front suspension system with torsion bar, which ensures balanced off-road mobility, handling, and reliability.

With a GVW of 7 tons and a payload of up to 3.7 tons, the AnacondA SOF can easily be adapted for any mission. The AnacondA SOF, displayed at Eurosatory 2022, is fitted with a roof mounted ring mount with the capability to accommodate multiple weapons systems. Also fitted is the anti-armour kit, which includes the possibility to fire a SPIKE-anti-tank weapon from the ring mount. Furthermore, additional storage for extra SPIKE ammunition is placed into the vehicle, thus creating a capability to be self-supportive in self-defence against different threats. Seating and storage components are mounted on ISO7166 rails, meaning almost endless possibilities to layout the vehicle. To give the crew an extra option to silently approach and engage threats, an electric off-road motor- cycle is placed on the back of the AnacondA SOF.

Furthermore, the AnacondA SOF complies, amongst others, with STANAG 4478 (Towing and Recovery), STANAG 3542 (Underslung Airlift) and can be fitted with a light (STANAG level 1) protection kit. By maximising the continuity of components, manufacturing and the serviceability by the IVECO worldwide dealership network, the logistical footprint is reduced while, at the same time, flexibility is improved by introducing a modular load-carrying-system and the utility of the fleet is greatly enhanced.